On December 17, 2013, the City of Vancouver’s Development Permit Board (DPB) will review a development permit application for a new Edgewater Casino at BC Place.

On October, 17, the BC government’s Kendall Report, conducted by BC’s Chief Medical Officer Dr. Perry Kendall, demonstrated that gambling addiction is very widespread and that it has doubled over the past five years.

In light of the Kendall report, Vancouver Not Vegas and its supporters make the following requests of the City of Vancouver and its DPB:

Vancouver Not Vegas asks the City of Vancouver’s Development Permit Board return the Edgewater Casino proposal to City Council for further review.

In October, BC Chief Medical Health Officer Dr. Perry Kendall issued a report warning that governments must do more to curb severe gambling addiction in BC.

In 2011 Vancouver City Council unanimously rejected the expansion of gambling licenses for Edgewater Casino, and approved the relocation of the casino to BC Place.

On December 17, the proposed Edgewater Casino goes to the Development Permit Board for approval. If it passes there, construction can commence before Christmas.

No further public hearings will be held.

In light of the Kendall recommendations and Vancouver’s Healthy City Strategy, Vancouver Not Vegas calls for the Edgewater application be returned to City Council for comprehensive public review and implementation of a harm reduction strategy for the casino.

Vancouver Not Vegas Submission to the Development Permit Board

Vancouver Not Vegas Submission to the Development Permit Board
July 15, 2013

Vancouver Not Vegas is a coalition of citizens and community groups advocating for a healthy urban environment, and concerned about the proliferation of casinos in Vancouver.

Paragon Gaming, the BC Lottery Corporation and PavCo have a history of failing to disclose material facts and circumstances to the public, including the status of signed agreements and the existence of independent revenue projections that conflict with inflated numbers provided to City officials and the public.

Our position respecting today’s application is to take no position, but to state on the record that

1.  Vancouver Not Vegas objects to the lack of transparency and public disclosure surrounding future plans for the Edgewater Casino. Under the Gaming Control Act, the public is entitled to full notice of all material circumstances surrounding proposed casinos, yet the public knows nothing at all about what will transpire;

2.  To comply with the Gaming Control legislation, it will be necessary for Paragon Gaming’s relocation to BC Place to return to City Council for public hearings. To date:

•  No plans or drawings for the site have been publicly disclosed,
•  No net revenue projections nor host city revenue impact has been disclosed or independently verified;
•  There has been no disclosure of public subsidies in the form of lease forgiveness, construction subsidies or environmental remediation to be born by the BC taxpayer.

3.  As gaming revenues in the new location will not substantially increase, but construction and operation costs will, it is probable that the proposed relocation of Edgewater Casino will result in decreased revenue to the City and provincial government, unless it is significantly altered.

4.  It is reported that Paragon is in discussions with other gaming providers. What is the subject of those discussions—ie, is Paragon looking to sell its interest, or is it in discussions to expand its gaming capacity in some form of amalgamation or joint venture that materially alters the proposed development?

Before the City exercises its discretion in favour of the applicant’s request for an extension of its gambling permit, we ask for Paragon to publicly disclose the nature of its discussions with other gaming interests, and to commit to limiting its intended licenses to those already approved for the site, i.e. 500 slot machines and 65 gaming tables.

Shane Koyczan joins Vancouver Not Vegas! Coalition – “We are More”!

This is the first anniversary of the Olympics Opening Ceremonies. Today Shane Koyczan joins our coalition against the Edgewater mega-casino and against gaming expansion in Vancouver and in BC in general. You probably remember Shane’s electric slam poetry performance at the 2011 Games ceremony – if you don’t, you can see it below. Thanks to Shane for lending his name to this fight. “We are More!”

Democracy consists, unfortunately, in citizens showing up to meetings. Sad fact, but true!

Please come out. You will have fun, meet a mix of people, and feel good about helping us demonstrate our numbers. Bring your ideas and your concerns about the proposed Edgewater mega-casino.

If we approve this mega-casino in Vancouver—if this public land is effectively given away to a sketchy Vegas company on an endless 70 year lease—we will never be able to get rid of it. Is this the image we want for Vancouver, internationally? No other major Canadian city has put a casino in its downtown core, or even close to residential areas. Once we go down this path, we can’t turn around. They don’t just want to put this casino in our downtown, they want to make this the biggest casino in Western Canada, and to have it built by a company that has only ever built truck stop, highway-side, trailer park casinos. The City of Vancouver has not done studies that indicate what the true economic costs of a casino are, but they easily make up a sum in the millions. And for what, $17 million a year? That’s not enough of an inducement for Vancouver – that’s a pittance in the City budget. This is a bad idea. Come out and have your say.

Vancouver will only be forced to make the right decision if the citizens of Vancouver show up and get involved.

Gambling was expanded throughout BC with the understanding and agreement that it would substantially fund BC’s crucial charities and non-profits. This has not come to pass, and charities are suffering. Minister Rich Coleman cuts them off from gaming revenues at will—and, so far, with impunity. But perhaps not for much longer. Why should we have a huge, crime-attracting casino in our city’s downtown if it’s not even going to fund the charities that keep our communities healthy?

Remember to sign the BCACG’s petition asking the City of Vancouver not to consider the BC provincial government’s application to expand gaming in the municipality until the province comes to the table to discuss its radical cuts of gaming-derived funding to charities and non-profits throughout BC.

The BCACG or British Columbia Association of Charitable Gaming is a non-profit organization that represents the charities who receive funding out of BC’s gaming revenues. Charities currently receive only about 10% of those revenues; BC legislation states that fraction must be 33%. Read the BCACG’s open letter to Minister Rich Coleman. Please send the petition link around!

The real relationship between the stadium roof and the proposed mega-casino? 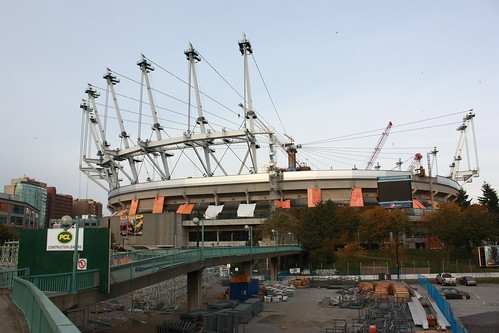 Photo: Dennis Tsang To learn more about the actual relationship between the stadium roof and the mega-casino, read this series of articles in the Vancouver Observer. Paragon, a Vegas casino company, was awarded the contract to build and operate the mega-casino in a very iffy bid process. It was awarded the contract by BC Pavilion Corp—a crown corporation known as PavCo which owns the land next between BC Place and the Cambie bridge. See here. Rumour has it that that Paragon told BC Liberal minister Kevin Krueger last year that without a retractable roof on the stadium, Paragon would refuse to build the mega-casino because supposedly without the draw of a retractable stadium roof, the stadium wouldn’t attract enough clientele to the casino. As for the mega-casino, this is a process that has been occurred very much under the radar of most Vancouverites who are unaware of what’s coming: a new development three times the size of the original Edgewater Casino currently located in an inconspicious spot on the other side of the stadium. City Hall has been strangely silent on the issue of this massive gambling expansion, considering that the BC government application to the city to expand gambling within our city limits will soon be before Council.

Some are saying that the retractable roof, one of the most expensive in the world, will cost twice  the public estimate, and apparently engineers are not even sure that the underlying structure will support the roof in all conditions.  At the very least, the City must get a full independent seismic assessment before granting the rezoning. And that’s not the only thing that City Council should be demanding of the provincial government before it negotiates further with them. Before Vancouver considers the government’s applications to expand gaming in Vancouver and to rezone the new casino site for a mega-development, the City needs to get the provincial government’s assurance that it will actually meet its legal obligations to hand over 1/3 of gaming revenues to BC’s charities and non-profits. (If the BC govt had honoured their 1999 Memorandum of Agreement, a legal document, they would have paid BC’s crucial charities and non-profits $1.3 bn more than they did; that amount is now in arrears). Both the City and Minister Coleman need to start coming clean about these developments.